This article appeared in the May 2016 issue of Speaker, the official magazine of the National Speakers Association

Would you like to enhance your credibility and authenticity factor on the platform? You can do it by applying a technique that actors have been using successfully for decades.

When you think of acting or actors, does “being phony” or “not authentic” come to mind? If so, you are thinking of bad acting and bad actors. The best actors seek truth in their work; the last thing they want is to have their acting “show.” They express the truth of the character and make everyone forget that they are acting. They make the audience believe that the actor is the character.

Whether you are speaking at a business convention or acting on a Broadway stage, you must be the embodiment of truth and authenticity. Consider the authenticity factor of the best speakers you know. They make audiences believe that they are their message.

The most important belief-building technique for actors is the use of acting objectives. Apply this technique to the rehearsal and delivery of your presentations. It will help you speak with a power and commitment that are visible on your body and audible in your voice.

When actors are preparing a role, they plan their actions carefully to help the audience believe that the make-believe situation is real. For actors, actions speak louder than words. Actors examine the script and create acting objectives: actions that lie underneath the words; actions to take toward their scene partners. In rehearsal and performance, they pursue their acting objectives as if their lives depended on it. This helps the actor speak the scripted words truthfully, conversationally and authentically. It also helps the audience believe the actor is the character.

This same process is very useful to professional speakers. The more rigorously you pursue your acting objectives on the platform, the more your listeners will believe that you are your message. And when you make your listeners believe, they are likely to overlook minor shortcomings or mistakes you might make, because you have won them over to your side. After that, your audience will forgive you almost anything.

Pursuing acting objectives when you speak gives you energy and focus. Note that, within the term “acting objective,” the word “acting” does not mean “to act a role;” it means “to take action.” Studies show that listeners pay the most attention to the actions underneath our words, expressed through tone and demeanor. Consider how they reveal sincerity, evasiveness or sarcasm, for example. 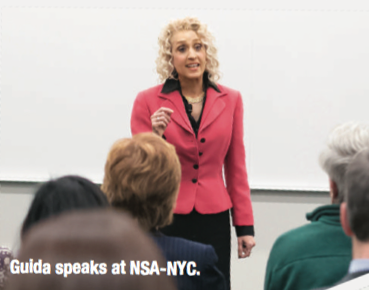 In order to identify acting objectives, actors divide the script (and you should divide your speaking notes) into units; actors call them “beats.” Each beat is a separate topic of conversation, smaller than the overall subject of the message.

For example, read the following excerpt from the “Greed Is Good” speech, delivered by Michael Douglas’s character in the film Wall Street:

“Our company, Teldar Paper, has 33 different vice presidents, each earning over $200,000 a year. Now, I have spent the last two months analyzing what all these guys do, and I still can’t figure it out. One thing I do know is that our paper company lost $110 million last year, and I’ll bet that half of that was spent on all the paperwork going back and forth between all the these VP’s. The new law of evolution in corporate America seems to be survival of the UN-fittest. Well, in my book, you either do it right, or you get eliminated.”

Take a deep dive into your presentation notes and divide your content into beats. In the margin next to each beat, notate what the beat is about (expressed as a simple noun or noun phrase).

No matter how you express humor on the platform, you should pursue actions directed toward your audience. Even if you tell jokes that have punchlines, there is no difference with regard to working with beats. Take, for example, Jerry Seinfeld’s joke about The Number One Fear:

“I saw a study that said that speaking in front of a crowd is considered the number one fear of the average person. I found that amazing.” (Beat 1)
“Number Two was death.” (Pause) “Death is Number Two?” (Beat 2)
“This means that, to the average person, if you have to be at a funeral, you would rather be in the casket than doing the eulogy!” (Beat 3)

Whether your humor is contained within stories, jokes with punchlines, or another spoken format, divide your humorous content into beats and notate the topic of each beat. 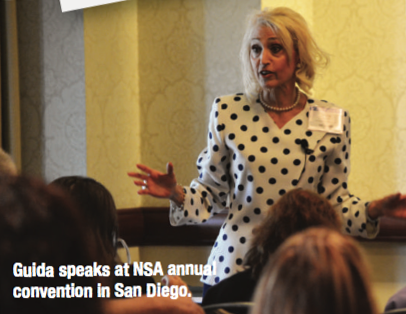 When you know what each beat is about, you are ready to identify an acting objective for each beat: what you wish to do to your listeners as you speak; and what you want to make them feel or do. There are three ingredients for an effective acting objective. It should be

Let’s take an example from the theater. An actor is about to begin rehearsal for a Broadway play, and she must identify her acting objectives. She decides that, in one beat, her character wishes to be powerful. That is the verb: to be powerful. But the verb “to be” is static; it does not contain the energy of action necessary for an actable objective. A better choice, but not perfect: “I wish to obtain power.” “Obtain” is an active verb, but not specific enough, so the actor now asks herself, “What must I do to obtain power?” When she answers this question, she knows what specific action to take toward the listener, in order to obtain power. She may choose one of these as an acting objective:

Here are three examples of acting objectives that might be useful when addressing a business audience:

If you are concerned that an acting objective under consideration might be too dramatic, remember that the purpose of using acting objectives is to drive your energy toward your listeners and intensify your motivation; they are for your private use. (Keeping your acting objectives private will increase the level of commitment and enthusiasm in your voice and gestures.) Dramatic acting objectives are excellent. They fire your passion!

For example, read this excerpt from Steve Jobs’ commencement speech at Stanford University: “You have to trust that the dots will somehow connect in your future. You have to trust in something: your gut, destiny, life, karma, whatever. This approach has never let me down, and it has made all the difference in my life.”

This beat is about the best approach to life. If you were on the speaking platform and had to speak these words, what would you want to make your audience do or feel? What acting objective might you choose? A few power verbs come to mind: to inspire the listeners; to make them feel hopeful; to calm their fears.

There are usually a few acting objectives that could be effective for any given beat. Test a few possibilities as you rehearse to discover which one most powerfully motivates and energizes you. The boldest choice is often the one that will connect you most passionately with your audience.

Choose objectives that are personally appealing and attractive to pursue. In your speaking notes, in the margin next to each beat, notate one acting objective.

Rehearse By Pursuing Your Acting Objectives 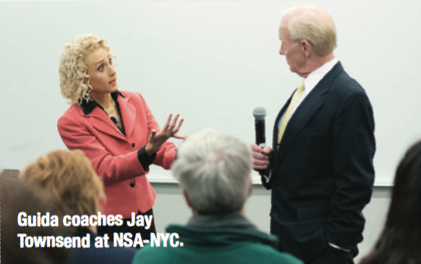 Actors rehearse aloud, rehearse often, and rehearse at performance level energy. Do as actors do. As you speak the words of each beat (internalizing; not memorizing),

Over time, as you rehearse this way, you will begin to experience increased joy in sharing your message. Technique will help you communicate the chief idea that no presentation should be without: “My message is important for you, so I love being here with you.”