Build Your Practice By Building Belief: A Lesson From the Theater 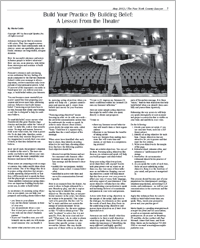 Attorneys have great deal in common with actors. They face negative stereotypes that they must continuously seek to destroy: actors are unreliable, phony airheads; attorneys are longwinded, arrogant sheisters.

How do successful attorneys and actors influence people to believe otherwise? How can you, as an attorney, help defeat these stereotypes and continue to build
your business?

Persuasive attorneys and convincing actors understand the key finding of a study conducted by the Harvard Business School: while your message is always important, content constitutes only seven percent of your persuasive power. A full 93 percent of the impression you make is based upon how you deliver your message, to build belief within your listeners.

You can become a more masterful persuader: spend less time preparing your content and invest more time rehearsing delivery behaviors that build listener
belief. Convincing actors know how to do this, because they spend years honing a craft that is designed to help the audience believe.

To establish belief, actors nurture what Stanislavski (the great Russian stage director and teacher) called the “sense of truth.” In daily life, truth is what actually exists. On stage and camera, however, truth is not what exists, but what is possible. To do their jobs, therefore, actors create truth; they exercise the power of the imagination to satisfy their own sense of truth, so that they themselves can believe.

In or out of court, the attorney’s situation is similar to the actor’s. The more sincerely you believe and deliver your message as truth, the more completely your
listeners (and jurors) believe it.

When actors are preparing a role on stage or camera, they make careful plans about their actions. One of the things they do is to pursue acting objectives that are personally appealing and powerful, so that they will be motivated to speak the lines that the playwright or screenwriter wrote. These carefully worked-out acting objectives are important building blocks that actors use, in order to build belief.

As an attorney, by pursuing acting objectives as you speak, you can help your prospects and existing clients believe that:

No matter what practice area you are in, pursuing acting objectives when you speak will help you 1. project commitment and passion and 2. create these beliefs (and more) for your business listeners.

“Pursuing acting objectives” means focusing on what we do with our words – the powerful communication actions that lie underneath the words we speak. In
order to make choices about actions, actors divide the script into units, called “beats.” Each beat is a separate topic, smaller than the overall subject of the
message.

When actors have identified what each beat is about, they identify an acting objective for each beat, choosing objectives that have the following qualities. Each objective should be:

Here is an example from the theater. An actor is about to begin rehearsal for a new Broadway play, and she is exploring her script to identify her acting objectives. She decides that, at one particular moment in the script, her character wishes to be powerful. That is her verb to be powerful. But the verb “to be” is static and does not contain the energy of action necessary for an actable objective. So, the actor rephrases this: “I wish to obtain power.” The verb “to obtain” is active, but it is not specific. Now, the actor must ask herself, “What must I do, in order to obtain power?” When she answers that, she knows what specific actions to take toward the listener. She may decide upon one of these verbs as an objective: “I want to (1) impress my listeners (2) instill confidence within my listeners (3) earn my listeners’ affection.”

Here are some sample acting objectives that might be useful when you speak directly to clients and prospects:
“I want to:

These are actable objectives. You can act on them. Pursuing acting objectives like these as you rehearse and speak will help you build prospect and client belief.

Keep your acting objectives private; never share them with anyone! Secrets hold great power over us; when we let them out, they lose some of their influence on our behavior. Keeping your acting objectives a secret will help ensure that they have power over you; power to affect your tone of voice, body language, and every aspect of your demeanor. Your secret objective will also have the effect of strengthening your motivation to speak and increasing the level of commitment and passion in your voice and gestures.

Attorneys can easily identify what they consider to be their overall objectives when they speak. Many, however, do not realize the importance of identifying the many different (and highly specific) objectives contained within the various parts of the spoken message. It is these “micro,” beat-by-beat objectives that help build belief when you identify them carefully and pursue them rigorously.

Rehearsing the way actors do will help you speak strategically at each moment and project a conviction that is visible on your body and audible in your voice.

This process should become part of your preparation for client/prospect meetings, telephone negotiations, networking/CLE events, and conferences—as well as your
communication in the courtroom and the boardroom.

Apply this technique from the actor’s toolkit to build belief every time you speak. Then, watch your persuasive power and your practice grow!

Maria Guida is a speaking strategist/coach at major law firms and law associations, as well as a corporate and television spokesperson. As an actor on Broadway,
TV, and film, she has worked with Paul Newman, James Earl Jones, and Kevin Kline. Maria can be reached at 718-884- 2282 or via email at maria@successfulspeakerinc.com.